Beryl is one of the most important gemstone groups. It is abundant in mineral form, but rarely occurs with transparent gem-quality material. Transparent specimens are referred to as 'precious beryl'. The most famous member of the beryl family is green emerald, followed secondly by blue aquamarine. Even though beryl is one of the most important mineral groups, golden beryl is not very well-known by the general public. Other popular beryls include pink 'morganite' and white, or colorless, 'goshenite'. Red beryl is the rarest variety of beryl and it is known in the trade as 'bixbite'.

Beryl in its purest form is completely colorless (goshenite). Trace impurities and coloring agents within colorless beryl are responsible for the many different colored varieties of beryl. Golden beryl's color is owed to iron impurities. Without trace elements and impurities, beryl would be rather ordinary and average, except for its superior hardness. 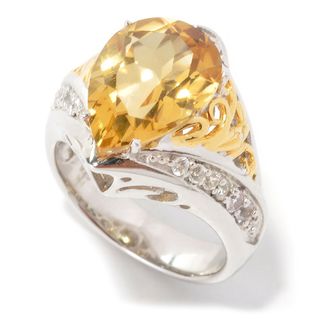 Precious beryl occurs in a variety of colors. The greenish-yellow colored variety is referred to as heliodor or golden beryl. Golden beryl is the most common gem-quality variety of beryl. Colors range from vivid lemon-lime to pale greenish-yellow to golden in color. Golden beryl, or heliodor, owes its color to iron impurities. Beryl can also display ranging levels of pleochroism.

Beryl can naturally occur in a range of clarity levels from transparent to opaque. Gemstone-quality beryl is transparent. Inclusions are rare for golden beryl and specimens are almost always eye-clean. When cut and polished, golden beryl has an attractive vitreous to waxy luster.

Beryl specimens from Brazil are known to be of the highest quality. Brazilian beryl typically exhibits excellent clarity and specimens from Brazil tend to be much larger than other sources. Other significant mining locations include Madagascar, Namibia, Sri Lanka (Ceylon), Nigeria and Zimbabwe. Aquamarine, the birthstone for March, is also sourced mainly from Brazil and Karur, India.

Golden beryl is known as 'The stone of the sun' and the term 'heliodor' was taken from the Greek language. Greeks believed that golden beryl contained the actual warmth and energy of the sun. Heliodor has been worn and used as talismans for many centuries. Golden beryl is said to boost the drive and determination to succeed of its wearer, and also protect its wearer from psychological manipulation by others. It is believed by some to deter spirits, ghosts and dark forces.