The history of jadeite goes back several thousand years when it was first used to make weapons and tools because of its toughness. Jadeite was highly prized by the Mayans and Aztecs, in fact the name "jade" originates from the Spanish "piedra de ijada", meaning "stone for the pain in the side". It was thus named after Spanish explorers noticed natives of Central America holding pieces of jade to their sides to cure ills. In Chinese, jade is known as "yu", which means "heavenly" or "imperial". Therefore, it is considered to be the imperial gem in Chinese culture. In China, jade was found in the tombs of Shang kings.

Jadeite is a pyroxene mineral and one of the two types of pure jade. The other is known as nephrite jade. Jadeite is the rarer of the two jades, and as a result, it is considered to be more precious and valuable. The most valuable form of jadeite is a striking and even emerald green known as "imperial jadeite". 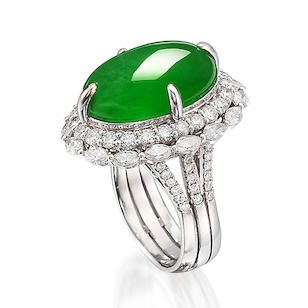 Jadeite ranges in color. It occurs in green, white, orange, yellow, lavender, gray and black. The purest form of jadeite is white and as with other colored gemstones, colors are a result of impurities. The most highly valued jadeite is a vivid emerald green and is translucent. The emerald green hue is a result of chromium, which also gives emeralds their beautiful green color. Emerald green jadeite is known as imperial jadeite and only occurs in Burma (Myanmar). Jadeite can be more than one color in a single gem. Jadeite in which the color is evenly distributed is highly valued. However, color preferences vary depending on the region. For example, in the West, deep and vivid green jadeite is preferred, but in the Far East, pure white or yellow jadeite with a pink tone is prized, along with green imperial jadeite.

The Mayans and Aztecs believed that jadeite could cure pains in the side of the body. This is where the name "jade" originated, since early Spanish explorers named it "piedra de ijada", meaning "stone for the pain in the side". The Chinese named jade "yu", meaning "heavenly stone", "imperial gem" or "precious gem", and in China, jadeite symbolizes goodness, beauty and purity.

In feng shui, jadeite is thought to influence prosperity and health. Jadeite is thought by the Chinese to possess healing properties, and bangles that are carved from a single piece of jadeite are thought to protect the wearer. There are numerous stories told of jadeite bangle wearers becoming seriously ill or being involved in accidents. In each of these stories, the bangle broke at a critical time and then the wearer miraculously recovered from their illness or emerged from the accident free from injury. It is said that jadeite bangles absorb negative energy, thus protecting those who wear them. It is also believed that jadeite reflects the life of the wearer, becoming more brilliant and bright during good times and losing its luster in times of suffering. In astrology, jadeite is associated with the sign of Taurus. Furthermore, jadeite is believed to allow its wearer to open their heart in readiness for love.