Labradorite is a gemstone that was named after Labrador in Canada, where it was found on the Isle of Paul, near Nain in 1770. It has since been found in other places, including Finland, Madagascar, and Australia. After its discovery, labradorite became popular with the missionaries. Labradorite is a plagioclase feldspar which shows adularescence (a white or bluish light seen when turned). This optical effect is so unique to labradorite that it has been termed "labradorescence". It is the result of diffraction of light in the layers of rock. When viewed at certain angles, labradorite exhibits such captivating color that has led to Inuit legends stating that the Northern Lights shone down on the shores of Labrador and were captured inside these colorful stones. The most highly valued labradorite is material that shows the full spectrum of color in its labradorescence. Labradorite that does not exhibit labradorescence can still make beautiful gemstones because of aventurescence, which is a glitter caused by diffraction of light from mineral platelets. 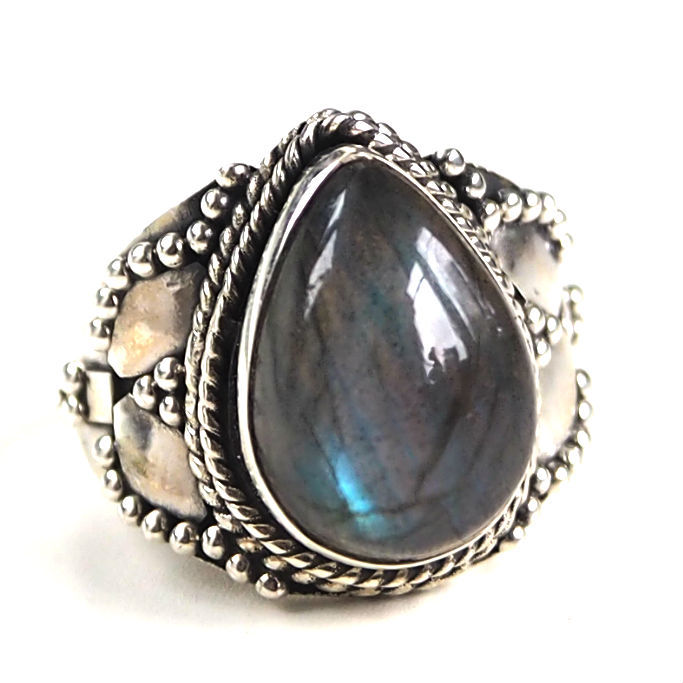 Labradorite is grey to grey-black with colorful iridescence, or spectral "labradorescence". This is a result of diffraction of light in the layers of rock. Popular colors are royal blue and multicolor. Labradorite can also be colorless, orange-red and brownish. The metallic tints of labradorite can show the full spectrum of color, especially in spectrolite, which is named after the full range of color that it exhibits.

According to an Inuit legend, the Northern Lights are captured in the minerals on the coast of Labrador. This is not surprising considering the magical, iridescent color of labradorite. Labradorite is thought to be a magical stone that possesses powerful protective properties and helps its wearer to find their true path in life. It is thought to "bring light" to the otherwise unknown, and thus provide its wearer with insight.

Labradorite is credited with having the ability to bring out the positive in people and calm overactive minds, bringing peace to its wearer. Labradorite is also thought to soothe menstrual problems, aid disorders of the lungs, prevent colds, help with digestion and regulate both metabolism and blood pressure. In traditional Hindu belief systems, labradorite is associated with the throat chakra, or vishuddha, which is the center of purification. The throat chakra is associated with hearing, speech and self-expression. Wearing labradorite is thought to contribute to true and honest expression. Labradorite is said to facilitate communication between the spiritual and physical world, helping its wearer to recall dreams and experiences from past lives. It is therefore thought to help bring out psychic abilities.