Larimar is a trademarked name for a rare blue, gem-quality variety of the mineral pectolite. Pectolite is normally gray in color and is actually not that rare, occurring in many locations around the world. But blue Larimar is found only in one location in the entire world - the Dominican Republic. Gemologically, blue Larimar is a hydrated sodium calcium silicate with manganese. Its distinct blue color is owed to calcium being replaced by copper impurities. The composition of Larimar is often mixed with other materials such as calcite and hematite. Its color can vary from white to light-blue, and from medium sky to volcanic blue. 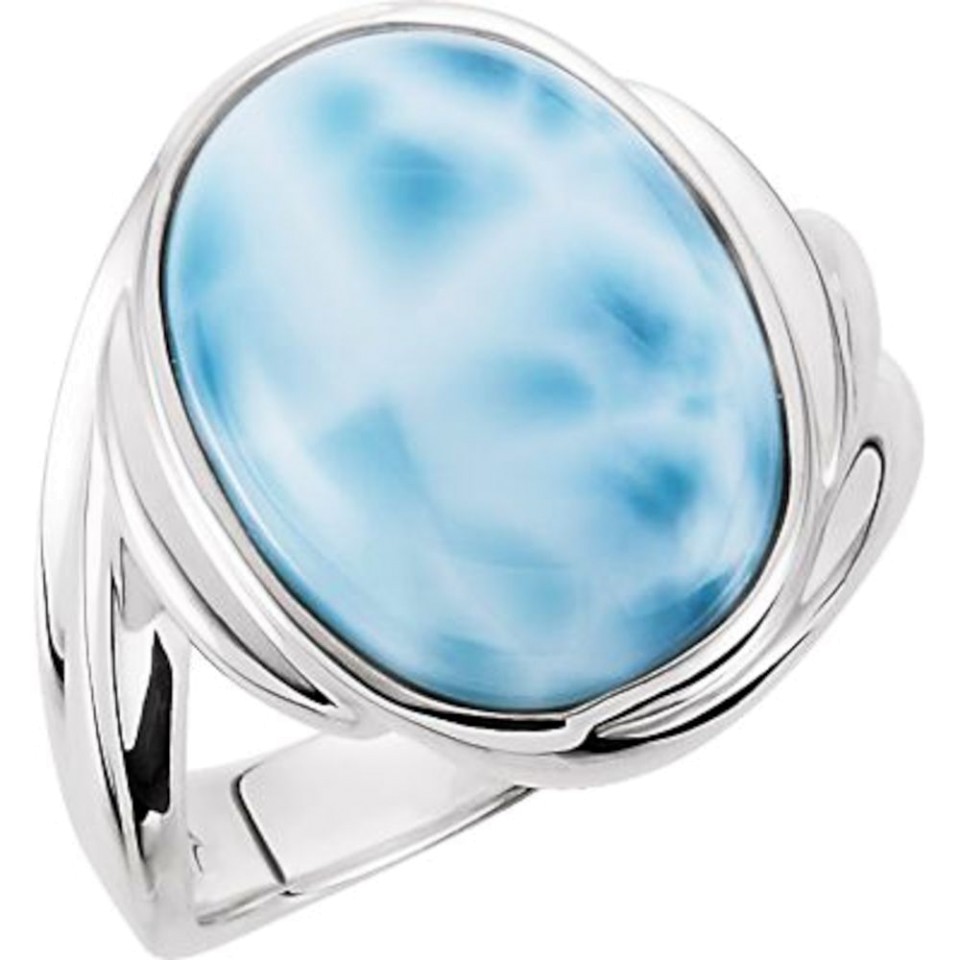 Larimar's color can range from very light blue to greenish blue, and from medium sky blue to 'volcanic blue', similar to turquoise. It rarely forms in solid colors; most stones exhibit white circular marbling patterns. The blue color is owed to traces of copper. Some stones may also exhibit spots of green, red or brown as a result of oxidation and the presence of iron. Stones with less white and deeper blue colors are considered to be the most valuable. Quality grading is done according to color; white is the lowest quality, while volcanic blue is the highest quality. Its color is photosensitive and it fades under exposure to strong sunlight and heat.

The only known source of blue Larimar is the Filipinas Mine in Los Checheses, located in the Dominican Republic. Larimar deposits surface as hot gasses push crystallized minerals up through the volcanic chimneys or tubes. In most cases, miners must dig deep into the volcanic tubes in search of deposits, but in some cases, it may also be found as sediment on the shores of the Caribbean, washed up as alluvial deposits carried down by the Bahoruco River.

Larimar is also known as 'the Atlantis stone', based on old legends which claim that the Dominican Republic was once part of the lost city of Atlantis. This association makes Larimar very important in the world of metaphysical gems. It is believed that the energy of Larimar can help to enhance spirituality and communication. It is a stone which is able to soothe emotions, cool tempers and alleviate stress, bringing a feeling of calmness to its wearer.

Larimar works with all chakras, but its vibration is thought to be best for the heart, crown and throat chakras. It is associated with the element of water, much like its color, though it was formed with volcanic roots. Physically, blue Larimar is thought to be able to help with throat and cardiac disorders, and it is also good for blood pressure and alleviation of joint and arterial pain.