Moonstone is the most well-known gemstone variety of orthoclase feldspar, a potassium aluminum silicate. It is a transparent to opaque oligoclase, a variety of plagioclase albite and sheet mica. Moonstone is known to exhibit a distinct sheen under certain lighting conditions, and it is the sheen which renders moonstone one of the most remarkable gemstones available today. In fact, its name is owed to the almost magical, bluish white shimmer it exhibits, which closely resembles that of the moon. Gemologists refer to the shimmering optical phenomena as 'adularescence'.

Moonstone can be identified by the presence of adularescence. Other gems with a similar appearance do not have the phenomenal presence of adularescence which makes identification of moonstone fairly easy. Moonstone is a potassium aluminum silicate and can be easily identified by composition. Many similar materials, such as labradorite, are actually plagioclase feldspar, whereas moonstone is by composition a potassium feldspar. Testing for hardness is often one of the easiest methods for distinguishing moonstone from other materials. Other similar gems, such as opal, chalcedony or ammolite, are significantly harder or softer than moonstone. Top quality moonstone can show an incredible "three-dimensional" depth of color, which no other gemstone can replicate, making moonstone almost unmistakable. 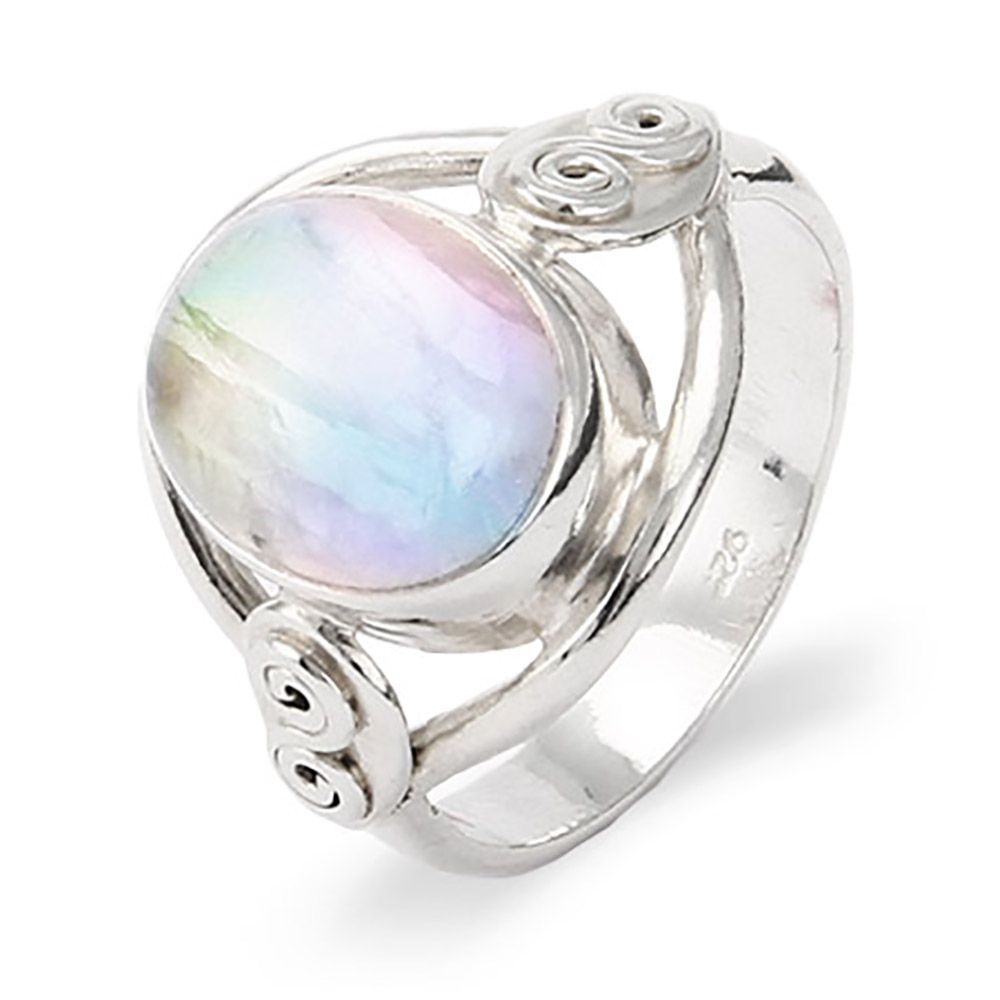 Moonstone is typically colorless, but it can occur in a wide range of colors, including gray, mocha brown, yellow, orange, green, pink, blue and white. It most often exhibits a white to bluish-white sheen, but other sheens can occur such as silvery and blue-orange. Sri Lanka's moonstones with a pale blue sheen on a near-transparent body are considered most valuable. India's moonstones show cloudlike plays of light and color which are very valuable including beige brown, green, orange or simple brown. Rarer colors include blue, peach, smoke, champagne, black and red.

Moonstone deposits are often found as constituents in feldspar-rich granitic and syenitic pegmatites all over the world. The most important moonstone deposits are from Sri Lanka and India. Other notable sources include Australia, Brazil, Germany, India, Myanmar (Burma), Madagascar, Mexico, Norway, Switzerland, Tanzania, and the United States. Sri Lankan moonstone is most famous for its attractive blue colored material, but blue moonstone is becoming increasingly rare. India is known for producing fine 'rainbow moonstone'. Switzerland's Adula Mountains possess the most historically interesting moonstone mines.

Moonstone is highly prized among lovers, as its thought to arouse tender thoughts and passion. Those who possess moonstone are thought to be able to foretell their future life together as a couple. Moonstone is the official birthstone for June and is associated with the zodiacal sign of Pisces.

Few gemstones have accumulated as much lore and legend as that of moonstone. Moonstone has been revered for thousands of years by cultures from every part of the world. According to Hindu legend, moonstone was formed from moonbeams; at one time it was believed that if you held one in your mouth during a full moon, you could see your future.

In India, moonstone is regarded as a sacred stone and it is widely believed to bring good fortune for those who wear it. In Arab countries, women were known to sew moonstone into their undergarments, because they were thought of as a symbol of fertility. In ancient Rome, moonstone was associated with the moon. It was speculated that the gem was formed from drops of moonlight. The gemstones were believed to possess the properties traditionally associated with the moon, including legends of romance, femininity, intuition, dreams, emotion and love.