Scapolite is a rare gemstone that is named after the Greek word, "skapos" meaning stick or stem, due to the long columnar formation of its crystals. The most common color of scapolite is honey yellow, but it can also be violet, orange, pink, brown, gray or colorless. Its brilliance and vitreous luster make it a desirable gemstone and collector's item. Scapolite is also referred to as "wernerite", after its discoverer. Other pseudonyms for scapolite are mizzonite, dipyre, marialite and meionite. 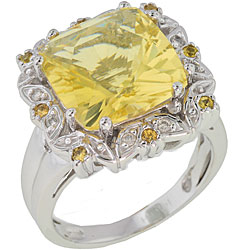 The most common color of scapolite is honey yellow, but it is available in other colors such as orange, violet, pink, brown, grey and colorless. Cat's eye scapolite often occurs in greenish, brown and grey. Bright purple scapolite is considered to be the most valuable. Scapolite stones with high color intensity are the most desirable.

Gem quality scapolite is extremely rare, but it can be found in a number of locations around the world. Tanzania is thought to produce the highest quality material. Other notable sources include Brazil, Burma (Myanmar), Canada, Italy, Kenya, Madagascar, Mexico, Namibia, Norway and the USA. Canada is known for a mottled variety of scapolite, closely associated with diopside. Although it is an opaque material, the mottled pattern makes an interesting gemstone when cut en cabochon.

Scapolite is not a very well-known gemstone, so it lacks the legend, lore and beliefs that many of the more popular gems have. It is not an officially known birthstone, nor does have any official planetary or zodiac purposes. However, it does still carry a very strong energy, for both mental and physical ailments. This is due to its wide variety of colors. Each color is believed to help with specific areas of life or energy. In general, scapolite can help you find solutions to both past and present problems.

Scapolite is known as a stone for problem solving. It is also a stone of achievement. It can help bring about change, and provide inspiration and purpose to your life and to those around you. In traditional Hindu belief systems, scapolite is thought to balance the flow of energy in the lower chakras as well as Anahata or the heart chakra, which governs decision making, the emotions and love. Physically, scapolite is thought to help with glaucoma and cataracts. It is also believed to alleviate pain in the shoulders, neck, head and upper chest. Rainbow scapolite with inclusions of magnetite is used in crystal healing jewelry. Magnetite is a magnetic member of the spinel group, and is believed by some to possess beneficial magnetic properties.