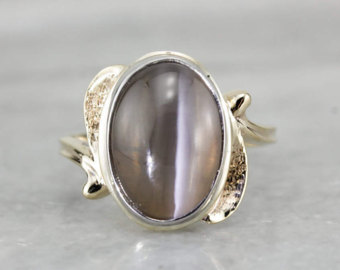 Sillimanite is almost always grayish to brown in non-gemstone deposits. Rarer colors, which are often used as gemstones include bright yellow, greenish-yellow, light-bluish, and violet to purplish-brown. Transparent sillimanite is usually greenish to yellow, and in rare cases, colorless and light-blue. Translucent to near-opaque gemstones are normally dark-grayish to greenish-brown. Some sillimanite will exhibit multiple colors depending on the angle from which it is viewed. Although its pleochroism is not as pronounced as in kyanite or andalusite, fine sillimanite will often flash yellow, green and blue from different angles. This can be seen more often in faceted gemstones than in cabochon sillimanite gems. Cat's eye sillimanite is almost always brownish in color, but high quality gemstones can exhibit a very strong violet hue.

For many years, sillimanite was considered rare and was found in only a few regions of the world. The most important sources were known to come from Sri Lanka (Ceylon), Myanmar (Burma), Kenya and also the United States. With a recent find made in India, sillimanite has now become less of a rarity. Even so, it is still a collector's gem to this day and very few people who are not in the gem industry would recognize the gemstone by name. Modern day sources for sillimanite include European regions, as well as all of the previously mentioned sources, with most of the material on the market today coming from India. The US State of Delaware declared sillimanite as its official state mineral, even though it was actually discovered in the state of Connecticut. Other sillimanite sources in the United States include Wyoming and South Carolina. The Mogok region of Burma and the gem gravel sources of Sri Lanka were known to produce excellent quality material, including a rare light-blue and colorless variety of sillimanite. Transparent sillimanite is extremely rare, especially colorless sillimanite, since almost all material contains some impurities which cause the coloring of gemstone-quality deposits.

Sillimanite is usually more popular with collectors rather than crystal healers and metaphysical gemstone advisors. It is not an official birthstone, nor does it have any astrological associations like many other popular gemstones on the market today. However, there are legends and beliefs surrounding sillimanite, but most are associated with the cat's eye or fibrous variety of sillimanite. Sillimanite is believed to stimulate the production of natural endorphins responsible for pleasure, so it is thought of as a "feel good" crystal. It is even thought to help those who are stuck in their lives with daily tasks and routines, by enhancing the energy vibrations that help you focus on those things that are most important in one's life.

In general, Sillimanite cat's eye gems can be used as stones for looking into one's past, as well as for insight into the future. For those who wear cat's eye gems, it is believed that the eye is protective and acts as a symbol of the past, present and future. Sillimanite Cat's eyes are also believed to be beneficial for those with any eye-related health problems. If used and worn correctly, it is said to help alleviate problems with glaucoma, cataracts and vision problems such as near or far-sightedness. For chakra energies, it is said to be powerful in supporting the heart and throat chakras and is said to enhance the intellectual spiritual body.