Tanzanite is a blue to violet gemstone which is a member of the zoisite mineral group. It was discovered in 1967 in the hills of Northern Tanzania, which remains the sole source of tanzanite to this day. Exactly who made the discovery of tanzanite is the subject of some debate. According to some, the first tanzanite crystals were found by Masai tribesman, Ali Juuyawatu. Other reports state that the discoverer was Ndugu Jumanne Ngoma. Finally, a further account credits Manual de Souza with the discovery of tanzanite on July 7, 1967. Tanzanite was given its name by Tiffany & Co. who promoted the gemstone, resulting in its sudden popularity. 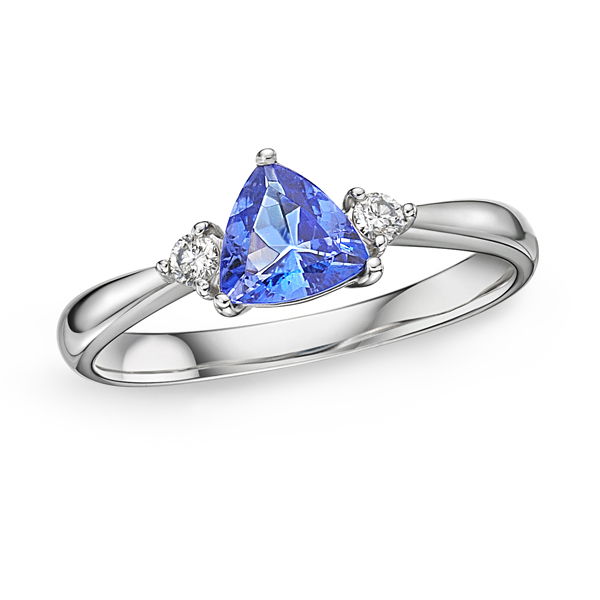 Tanzanite ranges in color from ultramarine to sapphire blue. Under artificial light, it may appear more violet. Tanzanite's pleochroism means that it can appear blue or violet when viewed from different angles. Tanzanite has a higher color saturation in gemstones of over 5 carats. The most desirable color for tanzanite gemstones is a deep saturated blue or violet-blue.

Tanzanite is only found in one place on earth; Tanzania, East Africa. The only known deposit of tanzanite is located on a five square mile hilltop at Merelani Hills near Ausha, ten miles south of the Kilimanjaro International Airport in Tanzania.

Tanzanite is considered to be a valuable spiritual stone that can be used in order to relate to other realms or for meditation. Tanzanite is thought to inspire compassion and to encourage calmness. It is also believed to be helpful in facilitating communication and solving problems.

In traditional Hindu belief systems, tanzanite is associated with Vishuddha, (the throat chakra), Ajna (the brow chakra) and Sahasrara (the crown chakra). This makes tanzanite a stone for higher consciousness, implementation of desires, self-expression, creativity, wisdom and communication. The color of tanzanite ties it to loyalty, faith, sincerity and respect. Physically, tanzanite is linked to the pineal gland, the pituitary gland, the thyroid gland and the mouth. Additionally, tanzanite has been added to the list of birthstones for those born in December by the American Gem Trade Association (AGTA). According to feng shui beliefs, blue tanzanite carries water energy whilst violet tanzanite carries fire energy.