Topaz is an aluminum silicate that contains fluorine and hydroxyl. In its pure form it is colorless (white). Impurities are what cause variations in color. Topaz has a history that goes back at least two thousand years. The use of topaz goes back to Egyptian times when the ancient Egyptians believed that yellow topaz received its golden hue from the Sun God, Ra. Some believe that "topaz" is a Middle English word, which was acquired from the Old French word "Topace" and Latin "Topazus", the root of which is in the Greek word "Topazios" or "Topazion"; the ancient name of an island in The Red Sea where the ancient Greeks mined a yellow gem that they believed to be topaz. The name of the island means "to seek" in Greek. It could have been so named because it was difficult to find amongst the mist. This island is now known as "Zabargad" or "St John's Island", and it is thought that the gem mined by the ancient Greeks was actually "chrysolite". The Christian Old Testament makes references to topaz, but this gemstone may have also been "chrysolite", rather than topaz. The word "topaz" could also have stemmed from the Sanskrit (the ancient language of India) word, "tapas", which means "fire". 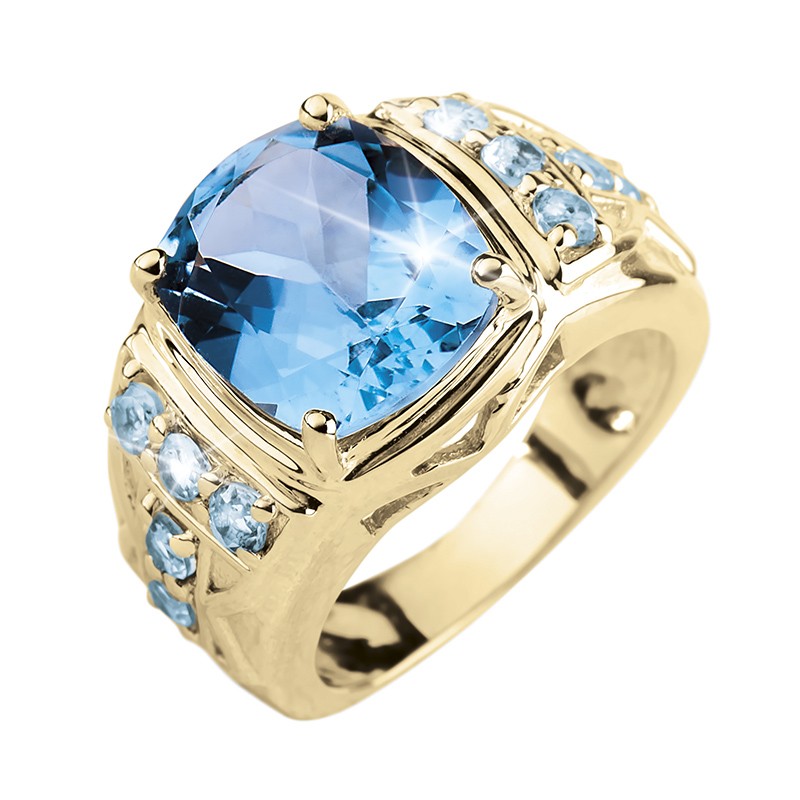 Topaz ranges from colorless (white) to yellow, orange, red-brown, light to dark-blue, pink to red, violet and light-green. This is the reason why it can be mistaken for many other gemstones. Naturally colored topaz gets its color from iron and chromium; the impurities cause color, whereas pure topaz is colorless. Most unadulterated topaz is colorless or pale blue. The most rare and valuable topaz is yellow, or pink to reddish-orange, and is known as "imperial topaz" or "precious topaz". Some yellowish-brown topaz gems can gradually fade when continually exposed to daylight. Red and violet topaz is incredibly rare. A lot of topaz is treated in order to enhance the color. Reputable gem sellers declare any enhancements.

The ancient Greeks believed that topaz was a powerful stone that could increase the strength of the wearer and even provide invisibility in desperate times. Both the ancient Egyptians and the Romans associated topaz with the Sun God. Imperial topaz is the birthstone for those born in November and for those born under the zodiacal sign of Sagittarius. It is also the gemstone that commemorates the 23rd wedding anniversary. Blue topaz is the birthstone for December and is used to commemorate the 4th wedding anniversary.

A1 Gems is a gemstone shop in Kolkata, we have natural Topaz in stock which are certified, our Topaz are procured directly from mines and our natural Topaz are free from any treatment, if you want to buy Topaz in Kolkata then feel free to contact us at +91 94335 46997