Tourmaline is the gemological name for an important group of complex gem-quality boron silicate minerals. Tourmaline gemstones can be found in all colors of the rainbow. Owing to its wide range of color availability, tourmaline is considered to be one of today's most versatile gemstones. Its name is thought to be derived from the Sinhalese word, "turamali", which means "stone with various colors" in reference to its extreme versatility. Tourmaline was first thought to be used as a gemstone around the 1500s, but distinct mineral species were not actually described until the 1800s. In 1875, George Kunz, an American mineral collector, introduced green tourmaline from the Mount Mica mine in Maine, USA to Tiffany & Co., which sparked an interest in tourmaline and led to its popularity (along with other semi-precious gemstones) on the mainstream jewelry market.

Tourmaline is actually a group of minerals and is a general gemological term used for several related gemstone varieties. Most types of tourmaline are classified according to their color. The following is a list of some of the most recognized and widely-used tourmaline trade names:

Paraiba - Light-blue, blue-green, vivid blue or green copper tourmaline, named after the state in Brazil where it was found.

Siberite - Lilac to violet-blue tourmaline, named after a deposit in the Urals.

Elbaite - Lithium tourmaline named after the island of Elba.

Tsilaisite - Manganese tourmaline named after a place in Madagascar.

Uvite - Magnesium tourmaline named after a province of Sri Lanka.

Watermelon tourmaline - Multicolored tourmaline that exhibits interesting pink, green and white color zones in the same crystal. When crystals are cut in cross section, a pink core with a white band and green edges can be clearly seen.

Cat's eye tourmaline - A rare chatoyant variety of tourmaline. The chatoyancy is usually strongest in green and pink tourmaline. 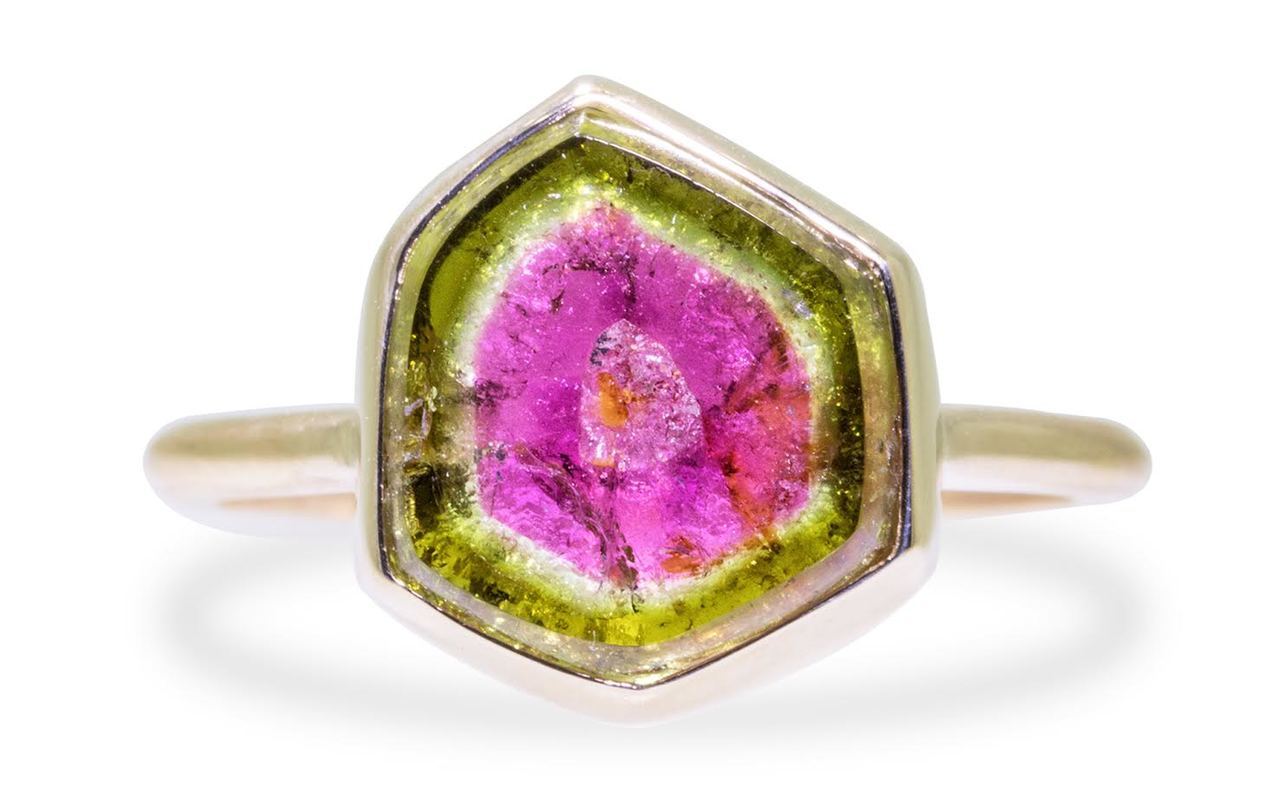 Tourmaline can occur in a wide range of colors from colorless to black. Colorless tourmaline is considered to be the rarest, but it is also the least valuable tourmaline. Black tourmaline is actually the most common color occurrence. Most tourmaline gemstones display two or more colors in a single stone (or two tones of the same color). Tourmaline crystals that exhibit green on one end and pink to red on the other, with a band of white in the middle are marketed as 'watermelon tourmaline'. Tourmaline exhibits strong pleochroism, which means its crystals can exhibit different colors depending on the angle from which they are viewed. Most red, pink and brown to yellow tourmaline is colored by manganese, while iron and titanium can result in greenish to bluish-black colors. Lithium impurities can result in just about every color, including blue, green, red, yellow and pink. The rare emerald-green chrome tourmaline is colored by chromium (and sometimes vanadium). Many pink tourmaline crystals obtain their color though a natural irradiation process. Cat's eye tourmaline is typically green or pink in color, although it can also occur in other rarer colors too. The most valuable and rare tourmaline is neon green-blue Paraiba tourmaline, which is colored by copper. Other valuable color combinations include purplish-red 'rubellite' and blue 'indicolite'. When buying tourmaline, color intensity and saturation are the most important factors.